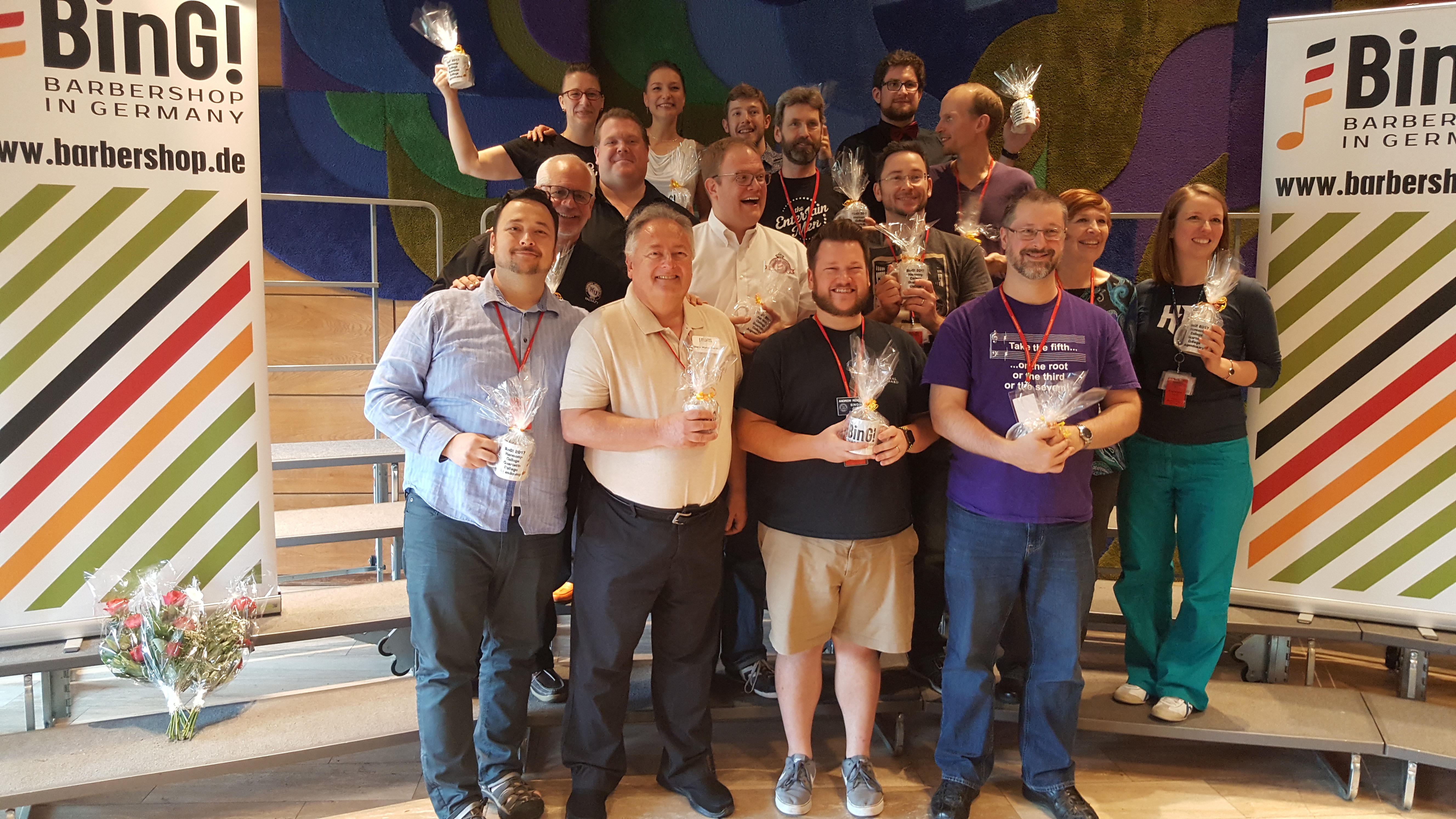 BinG's Harmony College is organised under a special motto every year and this year's 4-day event could hardly have been better described: New Horizons - Sing, love, grow. People sang (almost) non-stop, old friendships were renewed and cultivated and new friendships were made, and everyone has taken something special for themselves and has grown.

The event began on a Saturday this year and started with coffee, cake and the welcome by the BinG! president Gabriele von Rauch, followed by vocal warm-ups by Joe Cerutti and the first choir rehearsals and quartet coaching sessions. The first highlight was the quartet competition for the Coesfeld Cup. An incredible 25 quartets competed with each other this year, and it was an evening of high vocal quality, creative performances and several new quartets. The jury of seven people agreed: 25 quartets, all of them sung over 60%, is rarely seen at Barbershop Competitions. The lucky winners were SomeSing, followed by O-Ton and La Boom! All results can be downloaded here.

The next few days were full of hustle and bustle, long nights, a lot of singing and even more harmony. A few highlights need to be mentioned:

With 30 singers, the youth choir was once again stronger than in previous years. For the first time he was led by a pure BinG! team: Dominik Schaller and Mira Taferner.

In addition to the 13 international coaches, there were 6 German BinG! faculty members for the first time who passed on their knowledge: Simon Eisen, Simone Knoop, Lucas Bitzer, Mira Taferner, Franziska Schmidt and Dominik Schaller.

In a brilliant chorditorium, not only the moderator team was stunning - Thank you, Thorsten Engels and Alexander Koller! - but also every single vocal performance. Tears of emotion and absolute cheerfulness flowed abundantly, and video messages were recorded for our honorary members Liz Döring, David Wright, Steve Hepner, Kurt Gerhardt and Tom Gentry.

When asked how they found the event, participants were practically unanimous in their answer:"That was the best HC so far. How can you top that?"

Anyone who knows the HC-Orga team and the BinG! singers knows: the question does not arise. Every year will be special! Therefore, all interested parties should make a note of the date for next year: 10/04 through 10/07, 2018.

What a breathtaking evening: On January 8, the EKBC was finally able to once again thrill the audience in the sold-out Senftöpfchen! With old and new pieces and two guest quartets, the "boys" offered a varied program ranging from the greatest ambition to hullabaloo - just like the chorus has been known and appreciated for decades.

EKBC's search for a new musical director ended with considerable success. Matthias Neuburger, long-time and now outgoing director says: "I am enormously pleased that the chorus has chosen Andrea Figallo as my successor."

Grunts come from the rehearsal room. A crow "answers" from outside. Truly unusual sounds produced by EKBC singers and singer friends. But it's all in good fun: Kerstin Greaves, singer, coach and certified CVT trainer, asked to try out sound effects like have been systematically described in the "Complete Vocal Technique".

We are the "Erster Kölner Barbershop Chor" and have also successfully participated in the casting of the Best Choir in the West. Nevertheless we are not looking for the first best!

We like to spice up our performances with the Cologne way of life and a lot of humor. Nevertheless, we are seriously searching!

Come over or tell your Swiss friends and relatives!